The TCPA’s values are built on a powerful history of utopian and progressive ideas which shaped the Garden City movement and which continue to provide a rich and creative springboard for shaping the future. Founded by Sir Ebenezer Howard in 1899 the TCPA represented a fusion of ideas about social justice, beauty in design, health and wellbeing and economic efficiency advocated by those such as John Ruskin, William Morris and Henry George. The pioneers of the movement, including Raymond Unwin, transformed the way society thought about and built places. They saw planning as being concerned with all aspects of human behaviour, from art and culture to education and the nature of work.   They recognised the intrinsic value of beauty in design and in the natural environment to people’s health and wellbeing. For the TCPA planning was, and remains, a creative artistic activity as well as technical and analytical.

The TCPA founded the first Garden Cities in Letchworth and Welwyn and successfully secured the first planning legislation in 1909. The association campaigned through the inter-war period for new settlements and a transformation in housing standards sparking a worldwide interest in town planning.

In the post-war world the TCPA was instrumental in shaping the new towns programme but its concern for humane and high quality places brought it into conflict with widespread deployment of high-rise social housing. From the 1960s the association pioneered community participation and education on planning and the environment. Figures such as Colin Ward provided a renewed interest in those whose voice was often ignored in the development process. His concern for the child’s experience of the city and with the direct community control of development offered a new approach to the governance of places.

From the 1980s onwards town planning became increasingly unfashionable. However, the association was at the forefront of advocating the values of strategic planning through the work of figures such as Sir Peter Hall and through the international learning which the TCPA was able to foster. The association embraced the principles of sustainable development as a re-expression of the ideals which founded the Garden City movement. Latterly the TCPA has campaigned strongly for new generation of Garden Cities and on the key challenges facing the nation such as poverty and climate change. The association has spoken out against the de-regulation of planning, but over the last decade it is best known for its positive campaign for Garden City principles including, for example, an appreciation of the links between people’s health and the design of the built environment.

The TCPA remains the world’s longest surviving charity promoting the values of progressive planning and place-making. A brief history of the first 100 years of the TCPA and the ideas on which it was founded is given in Denis Hardy’s publication, “1889-1999“. 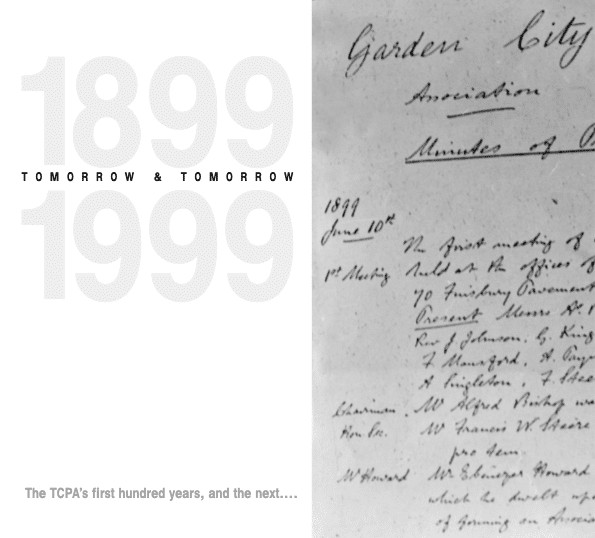