In an unprecedented joint-submission, a coalition of environmental and social charities and NGOs are demanding much greater action from government on planning for climate change. Along with the Centre for Sustainable Energy, the TCPA has led a coalition on a joint-response to the government’s consultation on changes to the National Planning Policy Framework (NPPF).

In sharp contrast to the Secretary of State’s comments on climate last week, the submission makes clear that planning is central to reaching net zero carbon.

The central plank of the response is that the proposed changes to the NPPF fail to address the seriousness of the climate emergency which the government claims is a priority.

The submission calls for specific additional text to be inserted into Chapter 2 of the NPPF to provide clarity on the importance of climate change within the context of sustainable development, and to explicitly set the 2008 Climate Change Act at the centre of the planning system. The coalition are calling for action on carbon reduction to become the first amongst equals as a material consideration in the planning process and for the following paragraph to be inserted after paragraph 9.

At the time of publishing (Wednesday March 24), the signatories were: 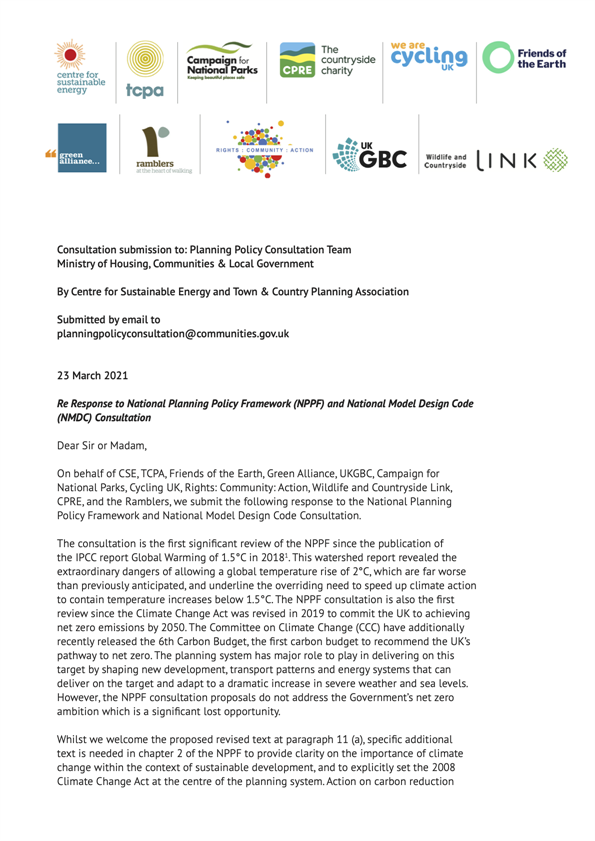 This is the way

Creating 20-minute neighbourhoods offers many benefits – but how do we get the idea off the page, and into our…