The history of the Town and Country Planning Association is in essence a history of town planning in the UK and beyond – in all its ideals and compromises, successes and failures.  The creation by the TCPA of an online, public access archive of its journal from 1904 to 2005 marks a major contribution to that history and perhaps its future.

The first edition of the journal, named simply The Garden City, reminded readers of the aims of what was then the Garden City Association:

To promote the relief of overcrowded areas and to secure a wide distribution of the population over the land.

Primarily, by advocating and assisting in the establishment of Garden Cities …

Secondarily, by encouraging the tendency of manufacturers to remove their works from congested centres to the country …

In 1906, the Association added a third objective: ‘the building of Garden Villages, as exemplified by Port Sunlight and Bournville for properly housing the working classes near their work’. It is the creative tension between these aims that has made the TCPA such a fertile and influential body in its field.

Naturally, in early editions a great deal of coverage is given to the first Garden City, Letchworth (and from the 1920s, its single successor, Welwyn). But what is most striking – and most useful to a later reader – is the sheer range of coverage. There is a proud internationalism which has distinguished the TCPA throughout its history. (It could come in useful too – in March 1915, the journal recounted how one council member detained by German authorities in Belgium had escaped execution when vouched for by a German national who had visited Hampstead Garden Suburb.)

And then, though a source of discomfort to some more purist members, there was an openness to the range of the more partial remedies to the problems of the day. Garden Villages, generally promoted by co-partnership societies, came closest to Ebenezer Howard’s ideal; Garden Suburbs less so. But each, alongside a few of the better municipal schemes, are given detailed and sympathetic attention.  The list of contributing writers – Howard, of course, but including Ewart Culpin, Raymond Unwin, Barry Parker, Patrick Geddes, SD Adshead and many more – provides a roll call of those who were or became the great and good in the planning field. 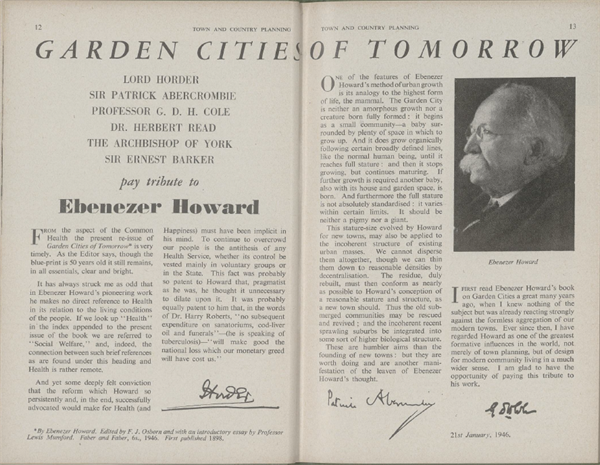 It was this idea of planning that provided cohesion to the Association’s aims. The journal was re-named Garden Cities and Town Planning in 1908; the Housing and Town Planning Bill introduced that year and passed the next was hailed as marking ‘a new era in the history of local government’.  The next major legislative breakthrough, the 1919 Housing and Town Planning Act, was praised as a ‘revolutionary measure’. But the Association’s concern for decent working-class housing did not cause it to forgo the big picture; the Act’s town planning clauses were condemned as ‘wholly inadequate’.

By this time, Frederic Osborn was emerging as a major figure in the Association – the most zealous advocate of New Towns but more willing than some others to accept a major role for the state. Typically, it was human failure and misfortune – the Great Depression and a second world war – that provided him and the movement its greatest opportunity.

Ebenezer Howard’s great idea of the Garden City has at last …. won its way to acceptance

Industrial relocation was addressed – though not quite in the way the Garden Cities Association had envisaged – by the 1938 Barlow Commission on the Distribution of the Industrial Population.  In 1940, the Association took its present name and the post-war New Towns, close enough perhaps to Howard’s founding ideals, came to seem the wave of the future.  In the spring 1945 edition of the journal, Osborn could proclaim that ‘Ebenezer Howard’s great idea of the Garden City has at last …. won its way to acceptance’.  Other articles of the time on ‘The Distribution of Industry’ and ‘Planning and Full Employment’ capture the broader excitement of the moment.

The New Towns – a record of their achievement and a critical defence of their ideals – loom large in the subsequent editions of the journal but in the 1960s the emphasis changes as the national and local state embarked on a huge public housing and slum clearance drive. There is concern over the form of new inner-city housing, particularly high-rise, renewed emphasis on community and popular participation.  A 1968 edition of the journal is dedicated to children for ‘if our towns and cities can be made satisfactory for them, it is certain they will also be vastly better for the older generations’. 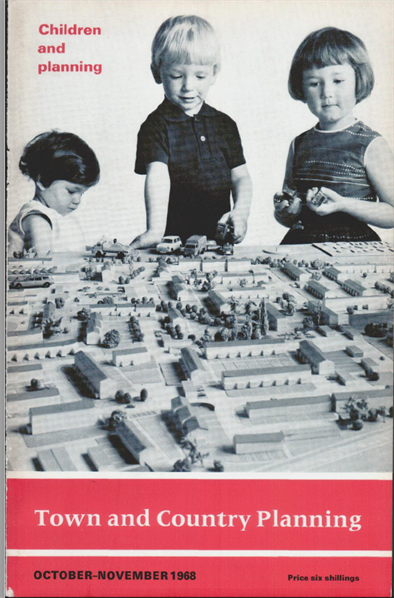 By the 1970s as the record of mass public housing is increasingly questioned, the Association and its journal is perhaps at its most radical. Environmental issues come to the fore and a new emphasis on education. Colin Ward, ‘the gentle iconoclast’ in the words of a journal tribute, features strongly in its pages. The new environmentalism led naturally to the concern for sustainable development expressed so powerfully in recent editions.

the journal both reflects and leads its changing times

In all of this, the journal both reflects and leads its changing times. It’s too easy to dismiss Howard’s original Garden City concept as utopian for, while the form and language may have changed over the years, what strikes one most strongly from browsing the journal is a worthy consistency and a message as relevant in adapted form now as it was in its origins. Practically, the journal offers researchers across a range of disciplines a wealth of detail in its exposition, analysis and data and will be a valuable source for many for years to come for both those with a purely academic interest and those with a more practical and professional focus.  It continues to be published, of course, and remains essential reading for anyone interested in the field.

As Sir Peter Hall wrote in a 2005 edition of the journal, ‘you learn a lot from history, if you just stop to think’.  The TCPA’s new archive offers an excellent place to start. It will enrich our understanding of the past and, as its array of distinguished contributors over the years will surely have hoped, may yet help us shape that better future dreamed of by Howard and his successors.

This blog was written by John Boughton in a personal capacity and the views expressed here are his own. For more of his work, please follow his blog ‘Municipal Dreams.’

The photos included in this blog (Garden Cities of Tomorrow, Vol XIV No 53, 1968 October-November Special Children Edition, 1980 collections) are all taken from the T&CP journal archive.

Find out more about the history of the TCPA here.